Elham Fatapour is an Iranian mixed media artist based in Toronto. She has presented various projects in a number of exhibits across Toronto, including her work at Northbound Gallery Program and York’s on-campus gallery, the Art Gallery of York University (agYU).

The Master of Fine Arts student’s work, entitled homemade satellite dishes, is currently on exhibit in the vitrines in the breezeway at the Accolade East, where it can be viewed outside the agYU.

Clara Halpern, assistant curator at the agYU, had this to say of Fatapour’s artistic social commentary:

“It has been wonderful presenting homemade satellite dishes by Elham Fatapour in the agYU vitrines. This work brings together an unlikely pairing of materials, textiles, and satellite dishes that have been delicately painted to echo the same tones and patterns. By linking these objects, Fatapour draws attention to the practice of banning satellite dishes in regions where governments seek to restrict citizens’ knowledge, and counter-strategies by the public of camouflage and concealment to maintain access to media.”

“I think of my practice as a vessel for memories of past traumas. I use imagery, colour, and technique to charge my paintings with empathy and present them in mixed media installations that encompass the viewer. In order to convey both personal narratives and connect with a larger context, I depict my body in foreign spaces. I often paint figurative work at life scale. The installation of this work immerses the viewer and in doing so, opens a dialogue about the survivorship of displaced people. My work strives to be charged with empathetic visions, reified into mixed media installations often involving painting and performance.

“My imagery incorporates culturally symbolic materials, such as carpet fragments, to express my social and political investigations. I paint on and collage with traditional carpets to make reference to the historical and cultural importance of these objects. Both the patterns and colours of these carpets include symbols that propose non-normative ways of understanding history. Through the integration of domestic textiles, historic patterns, and figures in my work, I aim to conceptually implicate all people. 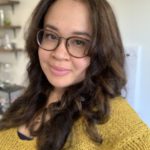