York announced that due to COVID-19, all sporting events will be postponed at least until the winter term, following a decision made by Ontario University Athletics committee.

The decision did not prohibit teams from practice and training, as many of the varsity teams are on university grounds attempting to stay on top of their game for when they return to play.

Students are given the ability to choose whether to return to campus or continue training from home.

The university placed strict guidelines based on federal and provincial recommendations, and the coaches and students must adhere to them. Dan Church, head coach of the women’s hockey team, explains that his team and the university are “leaning towards even stricter measures and erring on the side of caution.”

Provisions were set in place in order to keep students safe and to allow them to continue practicing.

“We have to do a daily screening for any training and they do a self assessment at home. Then they get a temperature check, they wear a mask, and they sanitize their hands,” Church says.

While weather permits, nearly all training is done on the York football field.  And as per the guidelines, all players must maintain a minimum of six feet from each other. 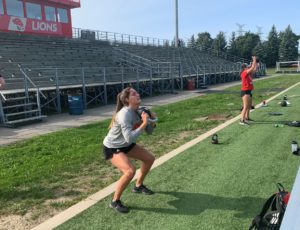 All equipment receives “rigorous cleaning between stations,” Church says . “So after they use equipment we have to clean that thoroughly with disinfectant sprays. They sanitize their hands between each station—there are a lot of precautions that we are taking to the training.”

However, students are given the ability to choose whether to return to campus or continue training from home.

Church explains: “It’s an unprecedented time in the world, our department took the stance that we were going to be as flexible and adaptable as we could be in the current environment.”

The pandemic created a situation where not everybody could attend the Keele campus, “every student had to look at their own financial situation before deciding whether or not they were going to come back. For some students, this means staying at home to earn money or to avoid paying rent,” Church says.

The athletics department realized the difficulties students would be facing, and gave them the opportunity to follow their team remotely and join them once they are ready.

We’ve been on the ice twice a week since June and wrapping up in August about three times a week.

Taylor Davidson, fifth-year criminology student and defencewoman, did not have access to the gym or equipment during the summer. “Fortunately, York athletics was able to send us some equipment to use as we adapted to these changes,” Davidson says.

“We have to create a plan that works for them and their home environment,” Church adds.

Kelsey McHolm, fifth-year communication studies student and forward, took the option to remain at home and is continuing her training in Winnipeg until mid October, where she has had the advantage of having access to an ice rink.

“We’ve been on the ice twice a week since June and wrapping up in August about three times a week,” says McHolm.

The Lions hope to get their shot at the Vanier Cup in the winter semester, which will be played out in a condensed version.