Students across the GTA are raising concerns about the provincial government’s handling of the TTC. Against the fraught backdrop of the COVID-19 pandemic, students have voiced their issues with overcrowding, lack of service, and new government recommendations that may lead to route cuts.

On September 12, transit activists held a protest outside the office of Scarborough Rouge-River MPP Vijay Thanigasalam, who serves as the parliamentary assistant to Ontario Transportation Minister Caroline Mulroney.

“Some TTC routes have been overcrowded throughout the pandemic, especially where essential workers are commuting to shifts,” says Rodney Chan, a member of transit advocacy group TTCRiders. “The TTC stopped running 100 per cent of service in May.”

According to a TTC staff report from May, regaining 30 per cent of demand would mean the TTC must return to running at full capacity, in order to make appropriate physical distancing possible.

The transit system as we know it has been consistently underfunded by all levels of government. This chronic underfunding, mixed with the conditions of the global pandemic, have put our overcrowded transit system and those who use it in a dangerous position.

However, Chan says this has not been the case.

“Currently, the TTC has 37 per cent ridership across the system and close to 50 per cent bus ridership, but full service has not been restored,” Chan says.

As cases of COVID-19 rise, the overcrowding of public transit will disadvantage those who lack access to any other form of transportation, potentially placing their lives at risk.

“The issue of transit crowding disproportionately impacts lower income students, working-class students, students with disabilities, racialized students, and so many more. These communities exist prominently at York, so we know that York students are heavily impacted by inadequate transportation services,” says Jessie Whyte, vice-president of Campaigns and Advocacy for the York Federation of Students (YFS).

“The transit system as we know it has been consistently underfunded by all levels of government,” Whyte continues. “This chronic underfunding, mixed with the conditions of the global pandemic, have put our overcrowded transit system and those who use it in a dangerous position.” 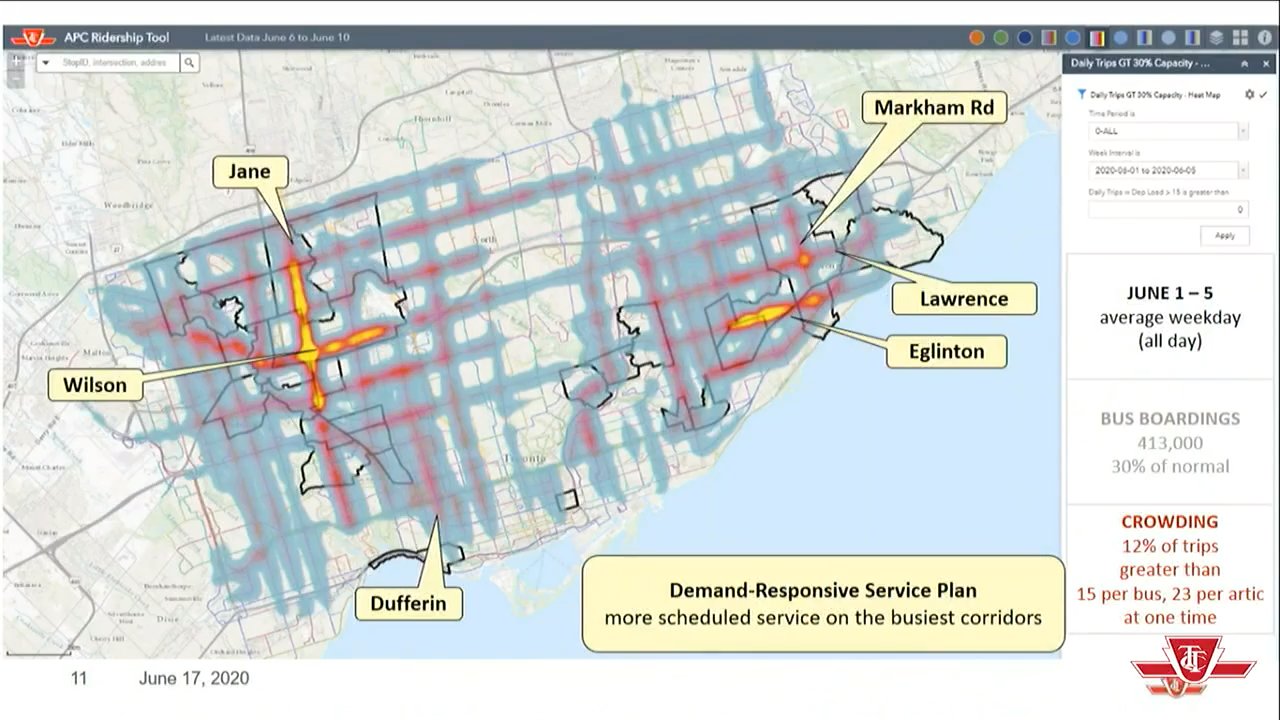 This map from the June 17 TTC Board meeting shows crowding (red and yellow) across the TTC network. (Photo Credit: Toronto Transit Commission via YouTube)

Students who take the TTC as a necessity are braving the frightening risks of unmaintained public transit during a pandemic.

“Many people were not wearing masks, and were not asked to wear a mask by any authority,” says Elaf Al-Maktari, a second-year nursing student at Ryerson. “This was highly concerning for me seeing as how the number of cases has been going back up as of recently. I think people are beginning to get too comfortable with the pandemic.”

On September 17, seven major student organizations, including the YFS, submitted a letter to Ontario’s Minister of Transportation Caroline Mulroney, on behalf of over 140,000 post-secondary students they collectively represent.

The letter called for action, stating: “We urge the Government of Ontario to provide permanent transit operations funding without conditions, to enable the TTC and other transit agencies to increase service capacity immediately on buses, streetcars, and subways.”

“The Ontario Government is committed to making sure transit remains a safe and reliable option for commuters as more people return to work as the province gradually and cautiously reopens,” says Thanigasalam. “$404 million is being provided to the City of Toronto in Phase One to address budget shortfalls that the TTC has faced over the past months, with more funding expected in Phase Two.”

However, this funding may come with a major caveat.

Other cities that have embarked on the risky experiment of privatized Uber service has led to the city losing control over their transit system to a global company, caps on how many rides someone is allowed to use per month, and far higher fares.

An August 12 letter from Mulroney to Mayor John Tory stated that in order to be eligible for Phase Two funding, the TTC must review their low-performing bus routes and consider implementing microtransit options.

“Microtransit, or providing right-sized transit, could be a more sustainable way to provide transit service to unserved and underserved areas across the province,” says Thanigasalam.

But many believe that microtransit may not be the right size for Toronto after all.

“When Ford talks about ‘microtransit,’ what he really means is he wants to replace bus service with privatized Uber service, which will run less frequently and cost far more for riders in the long run,” says MPP Jessica Bell, who serves as the New Democratic Party (NDP) transit critic.

“Other cities that have embarked on the risky experiment of privatized Uber service has led to the city losing control over their transit system to a global company, caps on how many rides someone is allowed to use per month, and far higher fares,” Bell adds.

For those who rely on the TTC, these changes would be nothing short of a nightmare.

“The pandemic has highlighted the many ways in which the government has continued to fail us, especially as students,” says Whyte.

“The Ontario Government should be doing what is long overdue, which is to increase and secure funding for public transit and prioritize the wellbeing of the people.”

Sakeina is in her third year at York University studying public administration and creative writing. She is committed to learning and writing about critical issues and uplifting marginalized stories. Outside of Excalibur, you'll most likely find her reading a book or collecting funny cat videos.