When asked what led her to write this book Butler says, “I was not led by anything specific to write it. It formed itself over the last few years. The manuscript was a messy collection of everything I’d written over the last three to four years.”

Many of her poems in Little Miracles are rooted in a deep sense of place that permeates her writing — some examples of this you can find on her social media and also around her hometown of Barrie, Ontario, where murals featuring her poetry can be seen.

“Place has a really big effect on me,” says Butler. “I’ve always been a bit of a homebody. I was that kid who had to call their mom in the middle of the night at sleepovers because I couldn’t sleep unless I was in my own bed. I’m still like that. I crave familiarity everywhere I go, and I think that is why a lot of my writing surrounds the concept of place.”

Butler continues: “Place is so tied up with my emotions and memories that it’s almost frustrating at times. There have been eras of my life where I have been so desperate to escape familiarity and old places that hurt too much to be in, that I’ve bought impromptu plane tickets and flown away from everything I call home. There have been other times where I take the long way home to avoid driving past a certain street or house.”

The memories and associations of places is one thing that makes Butler’s poetry feel familiar when you read it. As well as writing about where she lives, she spends time advocating to make her community a better place. “Getting involved and speaking up is a lot easier than you might think it is.”

Butler recognizes the overwhelming difficulty in getting involved with one’s community, but focuses on creating small changes where she can. “I started getting involved at the municipal level because it was a lot more accessible, and your city is essentially a microcosm of large-scale issues anyhow.” She emphasizes that it is the smallest steps that matter.

“You can figure out who your city council members and mayor are, attend council meetings, email your representatives, get involved with local groups that are pushing for change in areas that matter to you.”

Along with being a published author, Barrie’s poet laureate, and Editor-in-Chief of The Northern Appeal, Butler has also recently gone back to school to further challenge her writing and finish her degree.

With so much of the world and modern academia calling our attention in a million different directions, poetry calls us to slow down and pay attention. “We overwork ourselves, numb out on our phones,” Butler says. “It is hard to find a few moments for yourself to think, but even deeper than that, a few moments to feel. Poetry provides that. It gives you a little break amidst everything to get in touch with the parts of yourself that are lying dormant underneath stress.”

From being the first female poet laureate of Barrie to having her writing featured in public art displays, to starting the first literary magazine in Simcoe County and publishing an incredible debut poetry collection, Victoria Butler has certainly been busy as of late.

“There’s no time limit on when you need to accomplish your dreams,” she says. “You don’t even know what half of your dreams are yet — I sure don’t.” 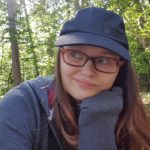