Every year, the student club V-Day at York builds a team that puts on a production of Eve Ensler’s The Vagina Monologues while holding events and fundraisers, whose proceeds are distributed to various organizations dedicated to helping women.

“V-Day at York is a club at York that functions as our community’s branch of V-Day, a global organization dedicated to raising awareness regarding patriarchal violence. Each year, V-Day at York puts on multiple creative events in order to raise money and awareness.”

Kayla Ado is one of two directors, joined by Megan Legesse, for the 2020-2021 season of V-Day at York. Among other contributors, their team also includes producer Samantha Uhl, and stage manager Karolina Solovka, who are both long-time V-Day participants. “This is my fourth year being a part of V-Day,” Uhl says, as one of many who are passionate about V-Day at York.

“The show takes this activist movement and combines it with the beauty of art, which is something I love to see,” says Solovka.

In a recent Instagram post, they announced this year’s twist of setting The Vagina Monologues in a strip club. Their production “will explore the different roles of women and non-binary folx in the sex work industry; whether they are an entertainer, a bartender, a server, or a patron,” their post says.

V-Day at York announced this year’s twist of setting The Vagina Monologues in a strip club. Their production “will explore the different roles of women and non-binary folx in the sex work industry…”

Ado explains her experience seeing The Vagina Monologues with Legesse and their peers for the first time, saying that their “excitement was short-lived as we all sat there watching a group of women who we could not relate to. The original play was revolutionary when it was produced but as time passed we have to recognize our responsibility to keep pushing the boundaries of what is socially acceptable to share.”

When asked for a sneak-peek at this year’s season, Ado shared that they will be creating an entirely new show focused on “amplifying the voices of BIPOC women and non-binary folx.”

“I felt that I could help with the issue V-Day repeatedly had with it’s lack of diversity and erocentic productions, since my art comes from a black woman, I wanted to use my sense to help with the change V-Day really needed,” Legesse says. “We feel that more than just including BIPOC artists, they should be telling their stories. We are excited to make this show an interdisciplinary piece of theatre, exploring movement, voice and dance all together.”

As directors, Ado and Legesse will be responsible for shaping this year’s piece. They plan to use various methods of devised creation to do so, through curating contributions made by their creative team, performers, and volunteers who submit work such as poems, stories, and other texts. They are almost finished their recruiting process, with deadlines for creative, performer, designer, and production applications having just passed.

Their main production will not be their only project for the 2020-2021 season, and even from their debut announcements, it is clear that V-Day at York has an exciting year planned. 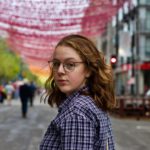